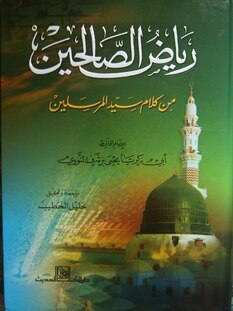 Introduction to the book:

Riyad-us-Saliheen, often referred to as The Garden of the Righteous, is a famous and popular collection of Ahadith by Imam an Nawawi. It is considered as one of the most reliable sources of the sayings and traditions of the Holy Prophet (SAWS). Riyadh-us-Saliheen is said to have a remarkable number of authentic, strong as well as a small number of weak Ahadith. The Ahadith compiled in this collection by one of the most reputed Imams of Islamic history cover every aspect of Islamic creed and Muslim moral conduct. It is a complete source of advice and guidelines for the entire Muslim Ummah.

Riyahd-us-Saliheen holds great importance among the various compilations of Hadith as it has Ahadith extracted from six canonical collections of the Prophet’s traditions including Sahih Al-Bukhari, Sahih Al-Muslim, Sunan Abu Dawood, Sunan An-Nisai, Sunan Ibn Majah and At-Tirmithi. It is one of the greatest books of Ahadith, which is most frequently referred to and read by Muslims for the knowledge of Hadith. Ahadith in this collection, as in other ones, have been reported in the traditional style of presenting the actual narrative and the isnad (the chain of narrators documenting the route for the transmission of the report). The isnad determine who narrated a Hadith and from whom; Isnad determine the reliability of a Hadith and they therefore hold some importance.

Riyad-us-Saliheen carries Ahadith about all walks of life; it cover Prophet’s words guiding the Ummah in matters ranging from Islamic beliefs to Islamic law, from human relationships to manners and morals, and from worship and prayer to Tawassul. It is the most reliable source of knowledge with respect to Hadith and so it has attained universal accolade.

Categorization and division of chapters

Riyad-us-Saliheen has approximately 2000 authentic Ahadith. It has 372 chapters and 19 sections covering good manners, etiquettes of eating, dressing up, sleeping, lying and sitting, greeting, visiting the sick, etiquettes of traveling, I’tikaf, Hajj, seeking knowledge, explanation of virtues, praise of Allah and expression of gratitude, supplicating, fasting, remembrance of Allah, details of prohibited actions, forgiveness, and miscellaneous Ahadith of significant value. This immense range of topics offer an opportunity to the readers to extract maximum knowledge of the messages of the Prophet (SAW) to his Ummah. The style of presentation in a systematic manner supersedes other works of similar nature.

Each section of the book provides exhaustive information on a specific topic. Every section carries a title. For instance, the section about mannerisms is entitled ‘Book One – The Book of Good Manners’; the section dealing with Hajj is entitled ‘Book Ten – The Book of Hajj’ and so on. This kind of systematic categorization of the contents of this book of Ahadith has made it an easy resource for Muslims.

Every category of Hadith is often preceded by a Quranic verse of relevance and importance. This helps to connect the sayings of the Prophet (S) with the Book of Allah and to have greater impact on the validity of the Hadith. In his introduction to An Explanation of Riyadh-al-Saliheen by Shaykh Muhammad ibn Salih Al-Uthaymeen, Dr. Abdullah ibn Muhammad ibn Ahmad Al-Tayyar, the supervisor of the Ministry of Islamic Affairs and Religious Endowments, states:

“The author (Imam an-Nawawi) adopted a practice of inaugurating the majority of chapters with verses from the Book of Allah, the Most High, corresponding to the subject of the traditions quoted in the chapter. The mode of arrangement and chapter division has been presented in a systematic manner, superseding the other works by virtue of this innovative arrangement.”

Source: An Explanation of Riyadh-al-Saliheen p.4. The Quran and Sunnah Society)

Classification of Ahadith in Riyadh-us-Saliheen

Ahadith in this compilation have been classified according to their strength. Imam An-Nawawi’s book has both strong and weak Ahadith though the collection is said to have a majority of strong Ahadith (Ahadith with credible chain of narrators) and the maximum number of weak Ahadith when compared to Sahih Al-Bukhari and Sahih Muslim. According to Imam Albani’s introduction to Riyadh-us-Saliheen, the book has some 37 weak Ahadith. For Instance, Imam Albani, in his introduction to Riyadh-us-Saliheen, relates Hadith 67 as a weak Hadith. The Hadith in ‘The Book of Feeling Allaah’s observance’ in Riyadh-us-Saliheen is recorded this way:

“On the authority of Abee Ya’la Shaddaad bin Aws, may Allah be pleased with him, that the Prophet said, ‘The wise is he who submits his soul, subjugates it to his Lord and works for that which is after death. The incompetent is he who follows his desires and wishes from Allaah [what he] wishes.’ “

Narrated by at Tirmidhi, who said, ‘A Hassan hadeeth’. (Weak Hadith)

Imam Albani explains that this Hadith is weak because ‘the isnad is da’eef (weak) as it has Aboo Bakr Ibn Abee Maryam, who was no longer himself and became mixed up after his house was stolen from him.’ (Source: Da’eef ul Jaami us Sagheer no.4305.)

Another example of Da’eef Hadith from Imam Albani’s introduction to Riyadh-us-Saliheen is Hadith 292 from the chapter of the Rights of the Husband over his Wife:

“On the authority of Um Salamah, may Allaah be pleased with her, who said that the Prophet said, ‘Any woman who dies in a state in which her husband was pleased with her will enter the paradise.’

Narrated at Tirmithi, who said, ‘A Hassan Saheeh hadith.’”

Imam Albani explains that this Hadith is weak because ‘in its isnad; there are two unknown [majhool] narrators. See ad Da’eef no.1426.

Another example of Da’eef Hadith is Hadith 736 in the Book of the Etiquettes of Eating, chapter 100 – The Chapter of Saying Bismillah at the Beginning and Al Hamdullolah at the end of Eating.

“Umaiyyah bin Makhshi (May Allaah be pleased with him) reported: Messenger of Allaah (SALL ALLAAHU ‘ALAYHI WA SALLAM) was sitting while a man was eating food. That man did not mention the Name of Allaah (before commencing to eat) till only a morsel of food was left. When he raised it to his mouth, he said: “Bismillah awwalahu wa akhirahu (With the Name of Allaah, in the beginning and in the end).” Messenger of Allaah (SALL ALLAAHU ‘ALAYHI WA SALLAM) smiled at this and said, “Satan had been eating with him but when he mentioned the Name of Allaah, Satan vomited all that was in his stomach.”

Reported by Abu Dawud and An-Nasaa’i.

Imam Albani states that this Hadith is weak because ‘its isnaad is da’eef – in it is al Muthanna bin Abdir Rahmaan al Khazzaaee, who is majhool, as stated by Ibn ul Madeenee.’

In defense of the presence of weak Ahadith in Riyadh-us-Saliheen Imam Albani states:

“And I feel the author’s excuse, may Allah have mercy upon him, for these weak Ahadith falling into his work, despite his attempt to only relate authentic Ahadith in it, is due to his reliance, for the most part, on Imaam Tirmidhi’s rulings of hassan and saheeh and upon Abu Dawood’s remaining silent about the rulings of certain Ahadith . . .”

Riyadh-us-Saliheen is highly recommended for all Muslims as it has a large number of authentic Ahadith from six canonical sources of Hadith. These Ahadith can help Muslims in all matters of life, major or minor. The content of this exalted endeavor of Imam an-Nawawi is appropriate for general readers and ordinary Muslims with regard to arousing a desire and rendering a source of motivation for performing virtuous deeds. This book provides knowledge on many of the matters related to Deen, worldly affairs and the affairs of the Hereafter. While discussing the merits of Riyadh-us-Saliheen in his introduction to An Explanation of Riyadh-al-Saliheen by Shaykh Muhammad ibn Salih Al-Uthaymeen, Dr. Abdullah ibn Muhammad ibn Ahmad Al-Tayyar writes:

“It is a book of instruction, unparalleled in content, pertinent to one’s existence on an individual and societal platform. It provides a complete code of conduct in these two spheres of life in a manner uncomplicated and intelligible, capable of being understood by both the learned and the general populace.”

Riyadh-us-Saliheen deserves a superior status as its content has the potential to quench the thirst of knowledge of scholars and laymen alike. Over the years it has sustained a lofty stature among the scholars as they have studied and elucidated it with dedication. Many general leaders of the mosques, scholars and students of Hadith have used it and are still using it as a resource book.

Biographical overview of Imam An Nawawi

Imam An Nawawi’s full name was Abu Zakaria Mohiuddin Yahya. He was the son of Sharaf ibn Muriy ibn Hasan ibn Husain ibn Jum’a ibn Hazam Al-Hazami Annawawi and was born at a place named Nawa near Damascus in the year 631 A.H. Imam An Nawawi had a great love for knowledge and learning. Even at the very young age of ten he declined all offers made by the children of his age for fun and games; instead he spent his hours in reciting the Quran and enlightening his heart with knowledge. According to Sheikh Yasin bin Yousad Marakashi:

“Imam Nawawi would always avoid play and would remain busy with the recitation of the Noble Quran.”

Imam’s father respected his son’s craving for knowledge and took him to Damascus in the year 649 A.H. for formal education. Imam Nawawi joined Madrasah Rawahiyah affiliated with the Ummvi University. He studied there for two years and was guided by more than twenty celebrated teachers. He mastered the fields of Hadith, Islamic Jurisprudence, syntax and etymology. Imam’s teachers appreciated his quest for knowledge and his methods of study. He devoted almost all of his time to learning, reading and writing. He spent most of his time in contemplation and to find solutions for different complex issues. He had a sharp memory and remarkable depth of thought.

Imam An Nawawi led a simple life – he wore simple dress and ate plain food. He indulged in religious and academic pursuits instead of developing any worldly interests. He was a God-fearing and humble person. Sheikh Mohiuddin describes Imam An Nawawi’s exalted person in these words:

“Imam Nawawi had three distinctive qualities: First, having knowledge and its dissemination. Second, to withdraw completely from worldly inclinations; and the third, inviting all that is good (Islam) to maintain Al-Ma’ruf [i.e., Islamic Monotheism and all that Islam orders one to do] and forbidding Al-Munkar [polytheism and disbelief and all that Islam has forbidden.”

Imam An Nawawi lived a short life of 28 years but during these years he provided the Ummah with some great books and compilations of Islamic knowledge. Some of his prestigious works include Commentary on Sahih Bukhari, Tahdhib-ul-Asma was-Sifat, Kitab-ul-Adhkar, At-Tibyan, Arba’een, Riyadh-us-Saliheen, Mukhtasar At-Tirmidhi, and Tabaqat Ash-Shafi’iyah. Imam An-Nawawi died at Nawa on the 24th of Rajab 676 A.H. and he was buried in his home town.
Arabic - Authentication Study by Nasir ud Din Albani (Read / Download)